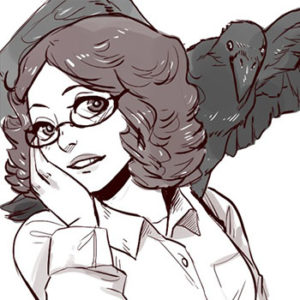 Howdy! I’m Kay C. Sulli and I currently live in southern California. However, I’m a bit of a rolling stone. I grew up and spent most of my life in Colorado in the shadows of the Rocky Mountains, then gallivanted in Wyoming for about three years, briefly worked for the Mouse in Florida, and spent some time in some pretty iconic places of northern California.

I’m not sure it’s so much of a guilty pleasure, but I honestly just love sitting by lakes and rivers. I consider myself more of an artistic naturalist than an adventurer (like many of my colleagues and friends), so while they’re off climbing a mountain, I’m drinking wine out of a Nalgene water bottle (because I’m classy like that) and just watching the water ripples over the stone, reflecting the ever common fool’s gold.

I guess she’s more of a superhero of the past (and based off a real person), but I always felt drawn to stories about women like Calamity Jane. In the dime novels and other stories, she became this larger than life person who lived out all these adventures in the American West. It was stories like hers that inspired me to get out and explore and look for heroes, outlaws, and rogues behind every bunch of sagebrush as a kid.

I love, love, love historical dramas (even when they don’t get history quite right). One of my favorites that recently ended was Turn: Washington’s Spies set during the American Revolution. I love stories where the connections between the characters really resonate, and this one has some great passions and conflicts. It was really refreshing to see something set in the 18th century.

“Wishing on the Perseid” is about someone going to the mountains to find peace and in the process connecting with someone who wants to hold onto something. It’s set in Rocky Mountain National Park in Colorado, one of my favorite places in the world. Like Ryan in the story, I spent five summer/fall seasons there as a park ranger.

The story takes place at the end of the summer during the Perseid meteor shower. The Perseids usually peak in the middle of August. When I started working on the story, I was sitting out on my back porch worrying about grizzly bears (because I was in Grand Teton National Park in Wyoming – another story in itself), and watching the “falling stars”. It just came together and I wanted to tap into the place, nature, and the spirit of the outdoors. Wishing on the Perseid is one of my favorite short stories that I’ve written.

Kay C. Sulli is a queer asexual writer of paranormal historical fiction and other stories. Not unlike any other errant tumbleweed, she goes wherever the wind takes her. Along with a trusty jackalope named Muse, she journeys through the tales of shifters, vampires, and sometimes even humans. Never far from her trusty fountain pens, she can often be found scribbling in the wilderness. She is often adventuring across the landscapes of the American West with a camera and a notepad to capture the stories all around her. Kay is on Twitter at @kaycsulli.