I live in Offenbach, near Frankfurt am Main, Germany.

My pen name for this anthology is Pascal J. Ellen. I sometimes write things under my real name too, but this is my first fictional work so I thought I’d come up with a name especially for this. 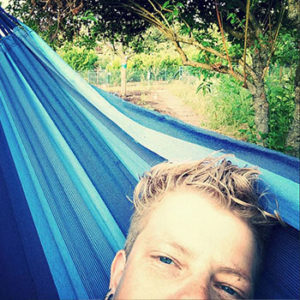 Pascal is the name my mother always told me she would have named me if I was a boy. Oh well, what do parents know about the gender of their kids anyway, huh 😉

Who is a character from a TV show or a book that you’ve always resonated with?

Back in the 90s I loved Darlene (Sara Gilbert) from the show Roseanne. I found out that a lot of the people I became friends with later in life did so too, but I don’t think any of my friends back then watched Roseanne. Anyway, Darlene was so funny, sarcastic, and snarky, I tried to be like her a lot.

Also I loved people like Marty McFly (Michael J. Fox) in Back to the Future, or Dwayne Wayne (Kadeem Hardison) in A Different World, and in general I love the Spiderman stories. I guess I always felt close to the people who seemed like underdogs or geeks, but were actually terrific human beings and succeeded in their own special way.

Where is your favorite place to go on a weekday afternoon when you have no plans or obligations?

I love to do grocery shopping. So when I get some time on my hands, I think of something delicious to cook, and then head to my favorite grocery shop. I only learned how to cook years after I had moved out from my parent’s house. Sometimes I still feel insecure about cooking because I taught myself—well, of course, the internet was helpful too. But that’s why I only cook for other people when I’ve come to know them better, and even then I get nervous and need to hear from them if they really liked my food, like really!?

My story is called “Gasping for Air” and is set in North Germany in a town called Bremen. The main protagonist Mika is enby (non-binary) and demisexual. “Demisexual” means they only feel sexually attracted to people they also have an emotional connection with. But more than this, Mika does not think that sexual relationships are more important than platonic ones. So I wanted to tell a story about queerplatonic friendships and how people can feel really close without having sex or kissing. Mika works in a left-wing queer bar, and we also get to know some of their awesome friends.

Writing this story was a lot of fun for me but I also learned that editing is hard work. I don’t know how ‘real’ authors do it and how they keep loving their stories despite the editing process 😉 This was just a short story, I can only imagine how much work goes into a real novel.

Pascal J. Ellen is a TV junkie and one of those queer cyborgs you meet at Twitter or Tumblr but never in real life. They are a feminist, a vegan food lover and a pop culture nerd. Pascal lives near Frankfurt am Main in Germany. They identify as demisexual and enby.