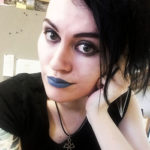 Who is a character from a TV show or a book that you’ve always resonated with?

Where is your favorite place to go on a weekday afternoon when you have no plans or obligations?

I can do most of the things I love at home. You can interpret this as cleanly or lewdly as you please.

This story “More Than Anything” is a prequel to my third novel, Reintegration. In that book, one major character, Lexi, proves often difficult to love. (I sometime strain the “likeability test” with my protagonists, as I’m not shy about writing damaged narcissists—see also The Diplomat.)

Here, an adolescent Lexi features in a story about relinquishment. Both this story and Reintegration are about pain, love, and the vital paradox of wanting to forget, yet needing the memory to survive.

This story, however, has more mutants in it.

Queerly Loving author Eden S. French is an award-winning novelist, a graduate researcher at the University of Tasmania, and nothing but trouble. She lives in Hobart, Tasmania with her enchanting artist girlfriend, at least one cat, and a sense of foreboding. Eden has just published Reintegration with Queer Pack. Find Eden on Twitter.

One reply on “Meet Our Author: Eden S. French”

Eden! would love to chat. You know where to find me. Love and miss you, dearly. Also, Zeke is doing okay with me, but they need a little lovin’.