I’m A.P. Raymond. Call me Alex. My pronouns are they/he – I like both. I’m from the Pioneer Valley in Massachusetts. 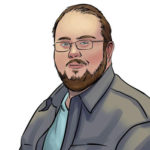 Chocolate, easily. But a good rich milk chocolate. Most American-produced milk chocolates are mediocre compared to the Canadian/international versions I’ve been lucky enough to get my hands on.

Who’s your favorite superhero, dead or alive – and why?

Robin Hood has been my hero since I was seven years old. We had just gotten a VCR when I came down with the chicken pox (for the first of two times), and my mom borrowed a bunch of videotapes to keep me occupied while I was all itchy and spotty. I nearly wore out Disney’s animated Robin Hood.

I loved how Robin and John helped the people around them, how they stood up against injustice, how they lived in the woods. Now that I’m older, and I’ve researched the original broadside ballads and early plays, and traced how the legend has morphed and adapted through time, well, I love it just as much if not more. Robin started as a folk hero and thief, out only for himself. He became something much more over time, standing up for the poor against the rich and powerful. To me, he stands against injustice and poverty and abuse.

My go-to comfort viewing is The Golden Girls. I grew up with the show as it first aired and watch the reruns almost daily on television, even though I own all seven seasons’ worth of DVDs. In fact, as I write this, the Girls are competing in a bowling tournament.

“Well I am stunned. Just stunned. Stunned is the only way to describe how… stunned I am.”

It’s funny, it’s socially conscious – many episodes are still far too relevant, it has a great big heart, and I love the Girls. I quote the show all the time – “Shady Pines, Ma!”

Well my story, “A Gallant Rescue“, was inspired by a 17th century Robin Hood broadside ballad. I took a very basic plot outline and a bunch of beloved characters, set them in space, and made them queer. I love science fiction – I’m a second generation Trekkie – and I created a blend of an old familiar story with the adventure and possibility of living in space.

A.P. Raymond is from Massachusetts, USA. A handful of identities resonate with them, including trans, nonbinary, queer, and bisexual. When not furiously scribbling down ideas, he enjoys nature photography, cooking, knitting, tending a forest of houseplants, and catering to the whims of the family cats. Find A.P. on Twitter at @apraymond3.