My name is Sacha Lamb, and I live in New England, USA. With occasional interludes in central Florida. 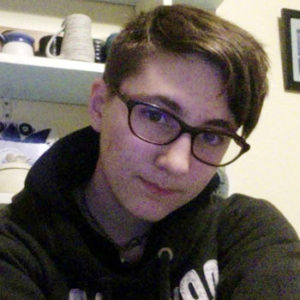 I try not to be guilty about taking pleasure in things, but some pleasures that nevertheless give me guilt once in a while are young adult fantasy novels about evil queens, and young adult contemporary novels about toxic friendships between ballerinas. (Eating disorders AND bullying? Even when they are not queer, they are relatable.)

I also have a large collection of stuffed animals (mostly lambs) but, honestly, I feel no guilt about that at all – they are my friends and I love them.

My story in Queerly Loving contains a reference to Jack Kirby, who invented Captain America, but my favorite is not Captain America. It’s Robin, from Batman.  Because I want to be Robin. Because tiny dyspraxic Jewish Robin would be Batman’s deadliest sidekick yet, right? I have a significant queer history with Robin, too, since trans interpretations of him in fanfiction were some of my first encounters with trans fiction.

I’m a big animation fan, and my favorite movie is Lilo & Stitch.  It’s one of the first films I remember seeing in theaters, and I cried my eyes out.  I rewatch this movie regularly and I always cry at it.

Lilo is a creative person with some weird interests and doesn’t fit in with the other kids. Stitch is an alien and the only one of his kind, and in the end they have a family complete with an older sister and her boyfriend, two weird alien dads, and one ex-government, Men In Black-type, now-social-worker dad.

Found family, aliens, finding the people who appreciate you and don’t want to bully or destroy you? It’s got everything.

My story, “Miss me with that Gay Shit (Please Don’t)” (by Fallout Boy :P), is about two nice Jewish boys, one trans and one cis, who look at each other and think, “Oh God. He is so hot, and he is SO stupid, and I AM SO GAY”.  Except neither of them quite has the social skills to say this outright, so it takes them awhile to figure out that it’s mutual.

When I wrote this, I had just finished another story that was very emotionally heavy (Avi Cantor Has Six Months to Live, Book Smugglers Gods and Monsters anthology, August 2017).  I wanted to write something light and comical for a change, so I went with a protagonist who is very loudly and dramatically frustrated about his crush on this boy who is part #transitiongoals and part dream date.

Elijah and Nick are both a little tactless and a little clueless, but their hearts are in the right places, and they love each other very much.  I hope you like them.

Sacha Lamb is a part-time librarian, part-time goat-herder, and part-time writer of queer Jewish fiction for teens. As a teenager, Sacha loved young adult fiction, but never felt represented in it as a gay, transgender reader. Now a graduate student in library science, Sacha is dedicated to creating stories for others who need to know they’re not alone. Sacha is on Twitter at @mosslamb.