My name is Aila Alvina Boyd and I live in a quaint town in Virginia in the U.S. 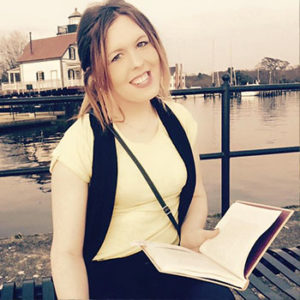 My absolute favourite television character is Annalise Keating from How to Get Away with Murder. When I watched the show when it first premiered, I was immediately blown away by how determined she was. She always seems to go all in with whatever it is she’s doing and that really makes for an interesting character, in my opinion. The other thing that drew me in was the fact that she’s so complex. She’s like an onion: so many layers. Also, Viola Davis does a great job at playing the character.

After a long day at work, I love being able to stop by a used book store. I find that they’re great places to get lost in.

I would love to be able to trade lives with an astronaut in order to be able to look down at earth. I must imagine that an experience such as that would change one’s perspective about what it means to inhabit the planet and to be human.

My short story in Queerly Loving

My story “Detective and Mrs. Baker” is about an LGBT liaison for a police department and a domestic abuse survivor who meet following a terrible event. Over time, they develop a close bond and start to build a life together. I was initially inspired to think about survivors of domestic abuse who are transgender and through that initial scenario, a story of recovery and newfound love developed.

Aila Alvina Boyd is an American fiction author and award-winning journalist. She holds an M.F.A. in writing and currently teaches English at a community college. Before turning to writing, she spent a great deal of time working as a thespian.