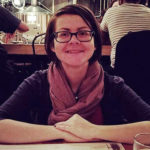 I’m Evelyn Deshane and I live in a small university town in Ontario, Canada.

Truthfully, I don’t like to associate guilt with pleasure. So instead I’ll just say that I really enjoy trashy true crime books and trashy crime shows, like Law & Order: SVU. I also may have a questionable interest in alien-abduction stories.

My favorite superhero, dead or alive – this is quite tough because I adore comic books and frequently change my mind about what superhero universe I love the most, so my favourite heroes are too many to count. Deadpool is my favorite superhero film among the many from which to choose. I enjoy comedic depictions of superheroes far more than the brooding kind (sorry almost all DC franchise films), and Ryan Reynolds’ Deadpool is the best for the gleefully boyish way he depicts him. I quote the film all the time with my partner, which is testament to how much the film impacted us both.

My favorite TV show, book, or movie – this is quite tough once again! But I’d like to combine my favourite movie, TV show, and book by listing Thomas Harris’s Hannibal Lecter series. I utterly adore all the books (though Red Dragon is probably my favorite); the film version of The Silence of the Lambs is stunning (and I miss Jonathan Demme so much); and the Bryan Fuller Hannibal TV show, especially the first season, is quite easily one of the most stunning shows I’ve ever watched.

“Dragons Do Not” is about a deaf queer woman named Juneau and her helper dragon named Keene. I wanted to write the story after playing a game of Super Dungeon Explore with my partner. In the game there are small cobalt dragons released at certain points that your character has to fight off. They were so small and adorable, though, I never wanted to injure them. It also made me wonder whether or not someone had ever written about dragons as companion animals, rather than as villains or treasure keepers. I created the story universe solely to explore that idea  –and truthfully, it’s something I want to revisit with more stories and even more dragons.

Evelyn Deshane‘s creative and non-fiction work has appeared in Plenitude Magazine, Briarpatch Magazine, Strange Horizons, Lackington’s, and Bitch Magazine, among other publications. Evelyn (pron. Eve-a-lyn) received an MA from Trent University and is currently completing a PhD at the University of Waterloo. Evelyn’s most recent project, #Trans, is an edited collection about transgender and nonbinary identity online. Evelyn is on Twitter at @evelyndeshane and online at evedeshane.wordpress.com.