We are facing serious upheaval and turbulent political times, and yet we can’t forget art. We can’t give up novels, poetry, paintings, music, and media, even in the most challenging of eras.

During the early years of the labor movements in the United States, circa 1911, suffragist Rose Schneiderman wrote:

What does, specifically, trans literature look like? It’s all genres, all styles. Yet fiction centering trans people is often difficult to get published by mainstream publishers, and a lot of the “trans fiction” found in chain bookstores is written by cis people.

I remember the excitement over cis-penned stories about trans experiences, and I remember being turned off by just the book blurbs. Cis readers marveled over these “brave, heartfelt” stories, yet they were often terrible portrayals of trans characters and trans identities. 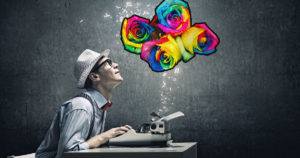 The first book with a trans character written by a trans person that I ever read was the seminal Stone Butch Blues, and for me nothing lived up to such a difficult, breathtaking novel for years.

Here’s the thing. We have voices. We have stories we want to tell. We need to tell them, now more than ever. We need the stories about trans people to be written by trans people. Now.

I’m not saying that cis people can’t write a trans character. They can and they should, and they should make sure they’re doing it well, just like every writer should try to include at least some characters with experiences different than their own.

Some cis folks write great trans characters. And the ones who succeed are not trying to tell trans stories, or stories that center around the trans experience, but rather simply include trans characters in the worlds they create. Trans-centered stories are not their job; it’s ours. The cis writers who do try to write “trans novels” tend to fail, even if cis readers fall all over themselves to love the books.

I’m sure many trans people have, like me, been trying out the next Great Transgender Novel™ (as decided by the mainstream), and wanted to throw it out a window partway through, because the clueless cis author just… messed up. A lot.

There is an amazing twitter account called @trans_lit, a community space where I’ve seen some insightful and lovely discussions. There have been threads full of book recommendations, excellent links, and other threads full of questions and answers vitally important to both readers and writers of literature focused on (or simply including) trans characters.

Our books are out there, it’s just a matter of finding them, and getting people—both trans and cis—to read them, to stock them in mainstream bookstores and get them into libraries. Yet, overall, our own voices are noticeably absent in the stories told about our communities.

Our Voices, Our Stories

We are not allowed to be our own storytellers when it comes to the popular media. Well, we’ll just have to change that, won’t we? It’s time to grow our roses, let them flourish and bloom, and pick them to put in water on our windowsills.

We need our stories out there, the stories that give us that visceral tug in our guts, the ones that steal the breath from our chests because yes, someone finally put it into words. The stories that just portray us as people, instead of hopelessly pitiful, or tragic survivors, or near-perfect heroes, the stories we desperately want out there in the world.

We need our bread. We need our legal rights and social safety nets and whatnot so we can keep living and breathing and be fed and housed and clothed and cared for as is every human being’s right. Those are essential. But never forget how art, how words, can feed the soul, can help us to bloom into our best selves.

Some further reading, for trans and/or cis readers/writers:

A.P. Raymond (they/them, he/him) is from Massachusetts (USA). A handful of identities resonate with them, including trans, nonbinary, queer, and bisexual. When not furiously scribbling down ideas, he enjoys nature photography, cooking, knitting, tending a forest of houseplants, and catering to the whims of their cats.  Find Alex on twitter: @apraymond3