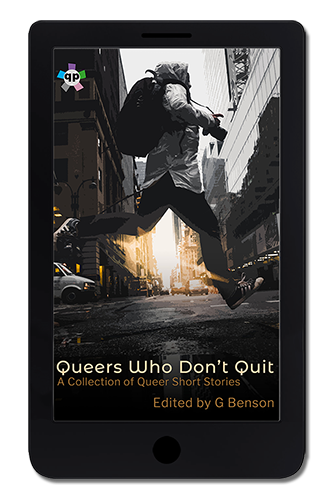 Queers Who Don’t Quit is hitting the shelves as queers from across the spectrum stand up and square up in our newest collection of incredibly queer and just plain incredible short stories!

There are times we all just need to forge onwards—or upwards. We can find that strength within ourselves, or people around us help. Sometimes, it’s both. In Queers Who Don’t Quit, queers across the spectrum hurdle the big, the small, and the unfathomable.

A cowboy and his boyfriend flee across the Martian desert with their stolen robot. Back on Earth, two aromantics bond over their shared love of pop culture. A trans woman finds herself between a rock and a hard place when someone from her past threatens to destroy her future. Space Boy remembers what it’s like to be in love with another boy, and two women have more in common than they think as they fall in love while cosplaying their favourite TV show. Queer men frolic at a gay beach balanced on sands of time. A bisexual, a widow, and a murderer walk into a bar–just wait for it, there’s a punchline. An enby down on their luck gets an offer from a goddess too good to refuse. In 1930s London, split ends are queerly healed. A queer college student seeks to rekindle a dying friendship during a trip to Paris. A trans teacher takes a stand against bigotry and finds love in the process. Love is found amongst giddiness, hard edges, and a darkly passionate theater. An ace vows to finally come out to her sister, and back in space, an arranged marriage connects two queer men. A woman discovers opening a queer bookshop isn’t all rainbows and sunshine. Adrift with her infantry company in one war, a trans warrior must face the ghosts of another. And on their first day back at work, someone can be the person we wish we’d met as a kid.

Join us in these queer stories of hope, resilience, and perseverance!

“This Is What You Get” by Evie Riojas

“First Day Back” by A.P. Raymond

“Version of Love” by Ayelet Enisman

“Under the Valley of Stars” by Alexis Ames

“The Path to Truth” by Aila Alvina Boyd

“So She Chose” by Zoe Brook

“Some Things Are More Important” by Addy Long

“All That Remains” by Nyri Bakkalian 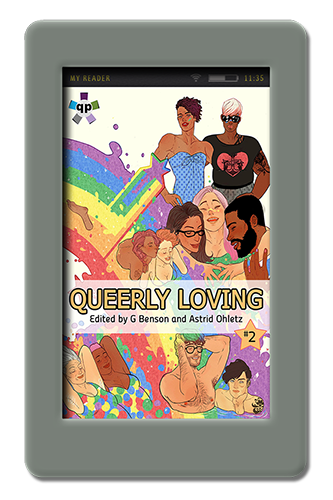 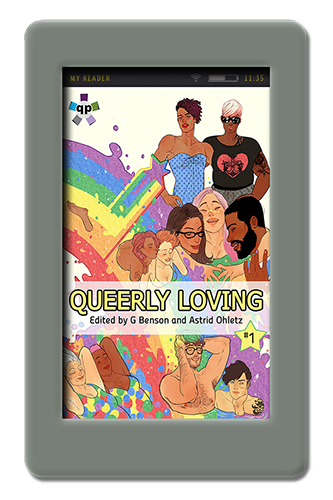 Other Books By - Various Authors

Queerly Loving #1 Anthologies & Short Story Collections Various Authors
Back
By continuing to browse this site, you agree to our use of cookies.